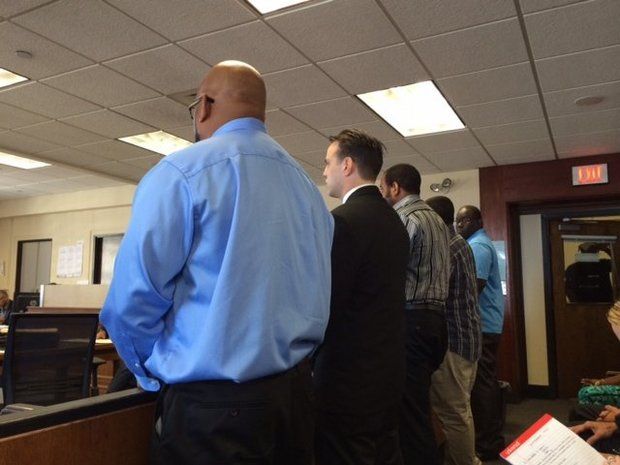 Five of the men accused of abusing juveniles at a state-run facility stand for their arraignments at Suffolk County Superior court on July 22, 2015. (SHIRA SCHOENBERG / THE REPUBLICAN)

Note: This article was originally published on Masslive.com.

BOSTON — In ritualized physical abuse that the staff referred to as “orange chicken,” prosecutors say staff members at a state-run facility for adolescent boys would pull down the pants of residents and hit them on their naked backsides with an orange, state-issued sandal.

The facility has since been closed.

“We are deeply troubled by this incident,” said Rhonda Mann, a spokeswoman for the Executive Office of Health and Human Services. “(Department of Youth Services) is committed to ensuring a safe, respectful environment for youth in its custody.”

According to prosecutors, staff members would enlist residents to participate in the assaults on other residents. The juveniles were told that if they did not participate, they too would receive “orange chicken.” There were other assaults that were not part of the ritual.

“Almost all the victims and witnesses disclosed being threatened by physical harm if they informed anyone about the assaults taking place,” Moroney said. She said several residents were told that staff at Casa Isla knew staff in other facilities, and they would face additional harm if they left the facility.

All of the staff members other than Fedna pleaded not guilty and, through their attorneys, denied the charges. Fedna will be arraigned on Thursday.

Gerald Noonan, an attorney for Andrade, said in court that his client “vehemently denies” the allegations, a sentiment echoed by the other attorneys.

Michael Doolin, an attorney for Laroche, said after the arraignment that the charges did not involve Laroche, who had no knowledge of any abuse. “He was not involved in any of these charges,” Doolin said. He said Laroche “looks forward to his day in court,” where he anticipates being acquitted.

After the arraignments, several of the men declined to speak to the press.

For 20 years, the state had a contract with Volunteers of America to run Casa Isla, a facility for short-term stays located on Long Island in Boston.

Stephanie Paauwe, a spokeswoman for Volunteers of America Massachusetts, said the organization is cooperating with investigators and has turned over 2,300 hours of security camera footage. “Casa Isla had a very strong system in place to ensure the safety and well-being of the young men in our care, and was led by numerous licensed and experienced professionals,” Paauwe said in a statement.

Just before the time the allegations were made, Paauwe said the Department of Youth Services conducted a regular review of the program, including the oversight of residents, safety protocols, monitoring, security cameras and reporting systems, and found it to be in full compliance.

“It is hard for us to imagine that this could have been occurring given the rigorous oversight by experienced and dedicated caregivers at Casa Isla,” Paauwe said. “But it is our collective duty to find out what happened and we hope that every step will be taken to ascertain the truth in this matter.”

According to the Executive Office of Health and Human Services, the Department of Youth Services received a verbal report of physical abuse at the facility in August 2014.

The department removed all youth from the program, terminated the contract with Volunteers of America, notified law enforcement and filed a report alleging abuse with the Department of Children and Families and Office of the Child Advocate.

WBUR first reported in April that Casa Isla closed in August 2014 amid allegations of mistreatment.

Two Department of Youth Services workers worked part-time for the program and have been fired, according to Mann.

Mann said the state provided counseling and support to youth who were victims or witnesses to the abuse.

Mann said the state conducts regular, unannounced visits to all of its facilities. “In response to this situation, DYS has increased its monitoring visits and program reviews to ensure that we are providing quality services, and that youth are being treated in a safe and respectful manner,” Mann said.

Moroney said in court that the investigation involving the Suffolk County District Attorney’s office, the state police and the Department of Youth Services has been ongoing since August 2014.

The defendants were all released on personal recognizance bail. They must stay away from Department of Youth Services facilities and current and former residents and they will not be allowed to have unsupervised contact with children other than their own.

Overall, the Department of Youth Services operates 58 residential programs for detained and committed youth, of which 19 are operated by the agency and 39 are operated by non-profit providers. Casa Isla was founded in 1991 and oversaw care of approximately 100 adolescents a year.

This story was updated to add information about Fedna.