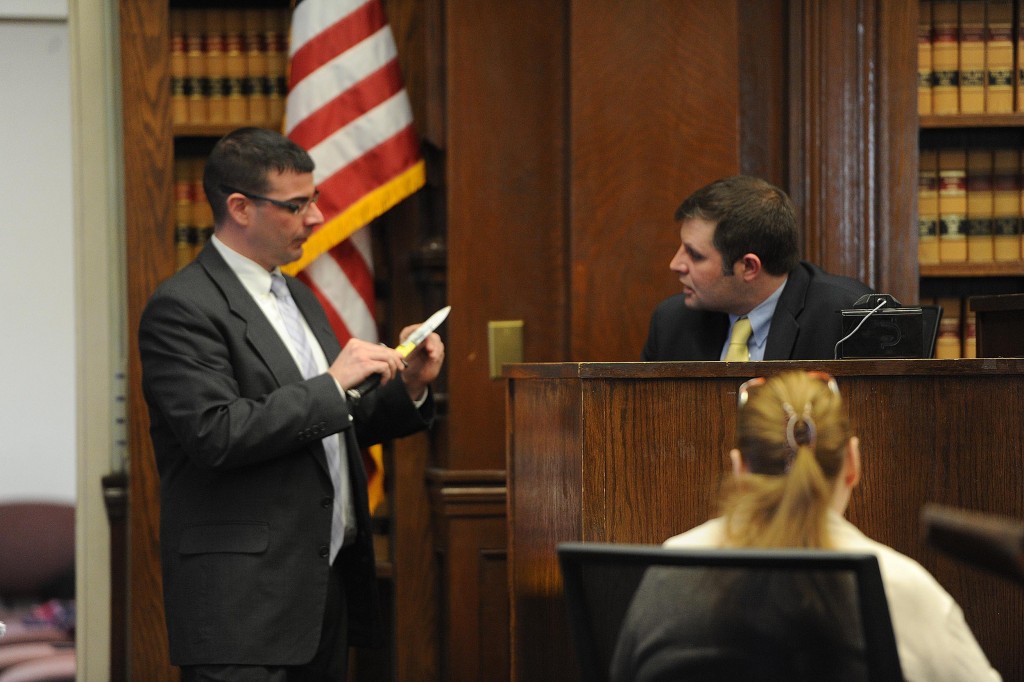 On Left: Defense attorney Patrick J. Noonan. The trial for a former Boston firefighter accused of assaulting his wife began Tuesday in Brockton Superior Court. Richard R. Parker, who worked for the Boston Fire Department for nearly 26 years and was also a 9/11 responder, faces a charge of assault to murder amid others against his wife, Kimberly Boleza Parker, from an alleged incident in 2011. Parker died March 10, 2013 of causes that have not yet been determined. Photo: Marc Vasconcellos/The Enterprise

BROCKTON – Stephanie Deeley still has the last voicemail her sister Kimberly Parker left on her cell phone from the day she died in 2013.

The message is Parker thanking Deeley for organizing a family event the night before. Every so often, Deeley listens to the recording just to hear her sister’s voice.

On Wednesday, Deeley listened to her sister’s voice again. The recording was of a frantic 911 call that Parker made on Dec. 18, 2011 just after 5 a.m.

“My husband is trying to kill me,” Parker yelled over the phone. “He’s got knives all over the house he just keeps throwing.”

Parker’s husband Richard R. Parker went on trial in Brockton Superior Court Wednesday, facing charges of assault to murder, kidnapping, assault and battery with dangerous weapon, threat to commit a crime and intimidation of a witness, as a result of the incident. Richard Parker worked for the Boston Fire Department for nearly 26 years and was also a 9-11 responder.

“Any time I hear her voice it’s difficult, but to hear her so terrified, it’s just heart-wrenching to listen to knowing what she went through that night,” Deeley said.

For Deeley’s family, the trial is another part of a long, painful road they have traveled in recent years, accentuated by Kimberly’s mysterious death at the age of 45 on March 10, 2013.

After 17 months of waiting for her sister’s autopsy results, Deeley said they were told last August that her cause of death was officially considered “undetermined.”

Also, Deeley said Richard Parker has not given anyone on Kimberly’s side of the family access to any of her belongings, including her cremated remains.

“He (Richard Parker) told us that we could all have some memory, some memorabilia, something of Kim’s. But we never even got to do that,” Deeley said.

When officers arrived at the Parker house at 3 Satucket Ave., in East Bridgewater in December 2011, they found Kimberly Parker 200 yards down the street in the woods with her two dogs. A police officer had stayed on the phone with her until officers arrived.

East Bridgewater Police Officer Joel Silva found Richard Parker in the woods 50 feet behind his house lying on the ground.

The inside of the house was in shambles. On a bedroom door there were several stab marks believed to be made from knives. Inside the disheveled bedroom a wall had multiple stab marks and slash marks and holes.

“There were items strewn all over the place. Broken glass. Things not in the right place,” East Bridgewater Police Officer Peter Bellmore said during testimony Wednesday.

Richard Parker’s attorney Patrick Noonan noted during the testimony Wednesday that Kimberly Parker was not injured and did not appear to have any cuts or bruises. Bellmore said she declined to go in an ambulance to the hospital following the incident.

Attorney Gerald Noonan told the jury that Richard Parker never threw a knife at his wife, never touched her with a knife and never put his hands on her during the incident.

For Deeley, they are hoping the trial brings closure on the incident.

“We’re in court for events that happened 39 months ago and we’ve gone through a very long process to get here. There’s some semblance that we’re finally going to get some closure on this issue,” Deeley said. “I just want Kim to be vindicated. What she said happened that night is in fact what happened.”

“She hasn’t been able to say ‘I don’t agree’ or ‘This is what happened and I’m telling the truth.’ She’s only able to speak through us. So we just want her story, her side to be told and we want people to recognize that she didn’t make this up,” Deeley said. “She went through an awful experience that night and she has a right to expect justice from that.”

The jury will continue Thursday in Brockton Court.