How to Get Paid After an Accident 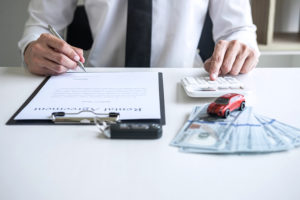 Just a few months into a recent year, and Massachusetts already saw 4,169 crashes, according to the commonwealth’s IMPACT website. That’s a little over 160 wrecks per day through just the first month of the year. Of those crashes, 13 were fatal.

Further breaking it down, 73 involved pedestrians and 13 involved bicyclists. Those aged 25 to 34 were in the most wrecks: 1,583. While many people end up wrecking at some point in their lives, you can only hope that if you haven’t wrecked yet, that you won’t get into an accident.

However, no matter how careful you are, you can’t control others’ actions, and sometimes, you can’t avoid them, either. For example, in a recent crash, a 23-year-old tried to pass another vehicle on the right and lost control. The person passing the car on the right lost control and hit a tree, causing his death and the death of his passenger.

The person he passed was not hurt, but the outcome of the wreck could have been very different: that person could have easily suffered injuries or death through no fault of his own.

What to Do After an Accident

In some cases, your injuries are bad enough so that you cannot move or do anything. However, if you can move around after a wreck, you should take several steps to protect your rights:

Even if you are still in the hospital, you should contact a lawyer. When you get your case started sooner, you are more apt to remember the accident, and prevent potential evidence from being lost or forgotten.

How an Attorney Helps You

All accident cases are different. Some are straightforward, and some are not. We offer free consultations to discuss your accident. Once we start working on a case, we might take several steps to help recover damages, including:

Not every case needs expert witnesses, and not every case goes to trial. However, if an insurance company refuses to settle for a fair and reasonable amount, we may recommend going to trial; but ultimately, the end decision is yours.

After an accident, you might collect three types of damages: Economic, non-economic, and punitive damages. Not all accident victims can collect all types of damages. The amount and type you collect depend on your injuries, and the actions of the defendant.

Economic damages, sometimes called special damages, are those with a specific price, such as surgery, a visit to a doctor, or even the cost of medical aids.

Non-economic damages, often called general damages, are those that do not have a specific price attached.

In most cases, general damages are awarded to those with long-term or permanent injuries, and might include:

If you are suffering from injuries due to a recent wreck, a personal injury attorney can help you understand your options.